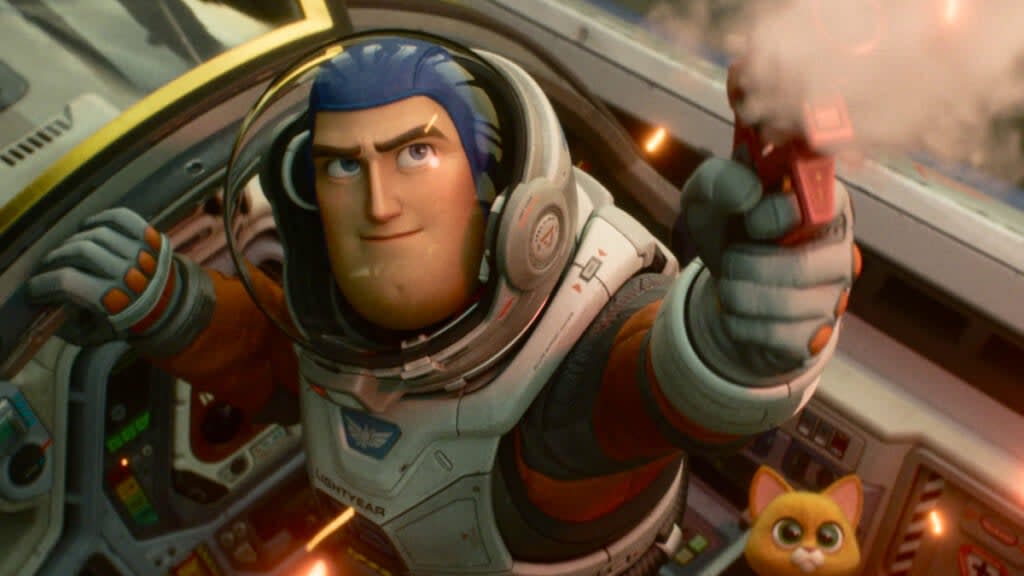 Disney/Pixar’s “Lightyear” fell far short of infinity and beyond with a disappointing $51 million domestic opening. While the animated spinoff of the “Toy Story” franchise wasn’t expected to score the $100 million-plus riches that recent Pixar sequels like “Toy Story 4,” “Incredibles 2” and “Finding Dory” had won, the film had been projected to open to more than $75 million in North America and over $125 million globally.

Instead, it fell behind the second-weekend grosses of Universal’s “Jurassic World: Dominion” on the domestic charts and opened worldwide to $85.6 million, a total that roughly matches Pixar’s first big box office flop, 2015’s “The Good Dinosaur.” Like “Lightyear,” “The Good Dinosaur” had a budget of around $200 million and failed to turn a profit with just $332 million grossed worldwide.

Despite the fact that franchise spinoffs rarely make as much as direct sequels, a spinoff based on one of if not the most iconic character Pixar has ever created was projected to do much, much better. But unless the film’s positive word-of-mouth gives it some miraculous legs, “Lightyear” is headed for a fate without profitable (and, likely, without sequels). Some of the factors behind this disappointment are certain, while others will need more data to confirm.

What went wrong? There are at least six factors that sunk Buzz Lightyear’s chances with moviegoers.

1. Buzz got shot down by fighter jets and devoured by dinosaurs

Let’s start with what we know for sure: “Lightyear” was a victim of the incredibly strong competition posted by “Jurassic World: Dominion” and Paramount/Skydance’s “Top Gun: Maverick,” with the dinosaur tentpole leading the charts with $58 million in its second weekend while “Maverick” continues to speed towards the $1 billion mark with $44 million in its fourth weekend, second only to “Avatar” for the highest fourth weekend total ever posted in box office history.

“Dominion” is performing just like 2018’s “Jurassic World: Fallen Kingdom” with a weekend drop of around 60%, but “Maverick” dropped just 15% from the $50 million it posted in its third weekend. Not only is its word of mouth spreading like wildfire and bringing in new viewers, but it is also bringing back fans for repeat viewings. Combine that with its popularity among older audiences, and “Maverick” became a popular Father’s Day selection.

2. There was confusion about what ‘Lightyear’ was…

A reason why spinoffs don’t do as well as their main franchise counterparts is because they separate themselves to a certain degree from what audiences find appealing about those franchises. “Fantastic Beasts” might have added Dumbledore in later installments, but the series doesn’t have Harry Potter and his friends. “Hobbs & Shaw” might have some “Fast & Furious” characters, but not Dominic Toretto and the family.

Not only does “Lightyear” not have the “Toy Story” characters audiences love — including Toy Buzz himself — but there was confusion about what the film actually was. This goes back to when Pixar chief Pete Docter first announced the film at D23 in 2019, explaining that the film was not going to star the Buzz Lightyear that fans know and love but instead tell the story of the “real” space ranger who inspired the toy franchise. Buzz’s new voice actor, Chris Evans, tried to make a similar explanation when the film’s first trailer was released.

That meta concept likely confused some potential viewers while becoming a joke on Film Twitter, even as Disney released TV spots close to the film’s release explains simply how “Lightyear” is meant to be the film that inspired Andy to buy a Buzz Lightyear toy in the original “Toy Story.” But this explanation and the sight of Buzz in a more detailed space ranger suit couldn’t make up for trailers that stayed light on plot details, likely pushing some moviegoers away from the film and towards the other popular sequels in theaters.

The slight bit of good news for “Lightyear” is that audience reception has been positive. Audience metrics for the film included an A- on CinemaScore and Postrak ratings of 85% positive, with 61% saying they would “definitely recommend” the film. Both Postrak results are slightly above what “Jurassic World: Dominion” got.

But that might not be enough to help out “Lightyear.” Those numbers, while good, were not as the 88-89% positive ratings and A CinemaScore grade that “Toy Story 4” and “Encanto” got, and “Lightyear” will have a limited window as the only animated film in theaters until Universal releases “Minions: The Rise of Gru” on July 1.

Sometimes it’s not enough for an opening weekend audience to just enjoy a film. To get the word-of-mouth momentum that “Dominion” and “Maverick” have, the film needs to get the reputation of being something that has to be seen in theaters; and there’s no sign that “Lightyear” has reached that level.

Which leads to the question of whether Disney’s recent trend of releasing Pixar films as streaming exclusives has dinged the venerable animation house’s reputation of making can’t-miss movies for the big screen. While “Soul” and “Luca” were released on Disney+ to hedge against a still-recovering pandemic market, the company’s decision to release “Turning Red” this spring after the streaming success of “Encanto” raised a lot of eyebrows.

It’s possible that parents, in an effort to cut down on expenses in an inflation-addled economy, are less willing to buy four movie tickets and concessions for anything but the biggest of films, and that “Lightyear” didn’t meet this increased selectivity as they decided to wait for a release on Disney+.

But it’s hard to pass and definitive judgment on the fate of family films at the box office because so few have dared to open in theaters as COVID has subsided. So far this year, studios have released only two animated films in theaters: “The Bob’s Burgers Movie,” a film that only drew fans of the cult hit TV series (and a modest $31.8 million global gross), and “The Bad Guys, ” a DreamWorks film not based on a pre-existing film series that has legged out to a decent $236 million globally but has not (and was never expected to) perform like a $200 million franchise tentpole.

Even Paramount’s “Sonic the Hedgehog 2,” a film that got robust family turnout and created the optimism for “Lightyear” and other summer family offerings, got a boost from millennials who grew up playing the “Sonic” video games and drove the sequel to nearly $400 million worldwide. Insiders at Disney say that while the studio is disappointed by the results for “Lightyear,” it is waiting to see how “Minions: The Rise of Gru” does before drawing any larger conclusion on how it handles upcoming animated films like “Strange World, ” which is set for a Thanksgiving release.

Also Read:
Chris Evans Is Ready for His Own ‘Lightyear’ Ride at Disneyland: ‘That’s the Dream’ (Video)

5. All eyes turn to Illumination

As a result of “Lightyear” and its failure to launch, analysts and other studios will be looking even closer at how Universal fares with the release of the latest installment of Illumination’s first and most lucrative franchise.

Unlike so many other spinoffs, “Minions” bucked the trend and performed better than any of the three films in the “Despicable Me” series on which it’s based. It’s easy to why. While other spinoffs have distance from the main series formula, “Minions” was an undiluted blast of the yellow babbling creatures that were the most popular element of the “Despicable Me” franchise. It was the franchise film equivalent of a bowl of Lucky Charms with just the marshmallows, and Universal rode it to a $1.15 billion global run in 2015.

6. Theaters are still raking in cash

“Lightyear” may be a letdown for Disney, but it is still contributing to the strong summer that movie theaters have enjoyed so far. Combined with the strong holdovers from “Jurassic World: Dominion” and “Top Gun: Maverick,” overall estimated totals for the weekend stand at $162 million, which is 19% higher than the same mid-June weekend in pre-pandemic 2019. When estimates for the Monday Juneteenth holiday are included, that total rises to $186 million.

Still, the weaker opening for “Lightyear” now means that domestic totals for June are unlikely to reach $1 billion — the monthly count now stands at $684 million through Sunday. But studios beginning to supply theaters the variety of offerings needed for a healthy box office, a trend that will continue this weekend with the release of the Blumhouse horror film “The Black Phone” and Baz Luhrmann’s music biopic “Elvis.”